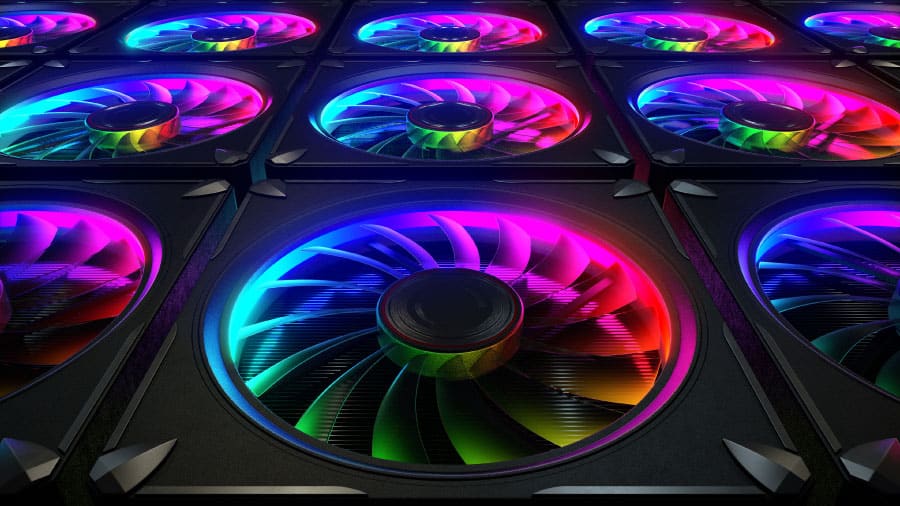 PC cooling is one of the most critical factors to consider when building a gaming PC. As computers execute demanding workloads, such as gaming, the hardware generates heat. Overheated components can slow down system performance and reduce productivity. Most gaming PCs come with built-in fans to regulate ambient temperatures. But, how many fans should a gaming PC have?

A gaming PC should have at least three case fans, other than the CPU, GPU, and PSU fans. At the minimum, you should have two case fans; an exhaust fan at the back panel and an intake fan on the front panel. If you have three fans, you can have two intake fans and one exhaust fan.

How Does Heat Affect PC Performance?

Although most computer hardware generates heat, excess heat can reduce system performance. Most CPU and GPU models autonomously trigger a mechanism that limits performance to protect the processors from damage when temperatures are too high.

CPUs and GPUs usually feature built-in cooling mechanisms. CPUs come with a cooling plate and thermal paste, while GPUs have fans and shrouds for thermal management.

How Many Fans Should a Gaming PC Have?

A good gaming PC should have a minimum of three case fans. Dual-fan configurations with a single exhaust and intake fan are enough for low-end gaming. However, CPU- and GPU-intensive games will need three or more case fans.

Also see: Gaming Laptops that do not overheat

Keeping your PC cool extends the life of mission-critical computer components, such as the CPU. The following tips will help cool down your PC when gaming.

Ensure that your gaming PC has a case fan or set of fans to take in cool air and another to remove the warm air. Place the intake fans near the drive bay of your case and the exhaust fans close to the CPU at the back of the case. This placement will help optimize PC airflow.

It is best to create breathing room around your gaming PC so that the air vents stay clear. If your PC is housed in a cabinet, keep the door open during use.

When playing games, crank up PC fan speeds to high revolutions per minute (RPM). CPUs and graphics cards tend to heat up during demanding workloads. Continuously monitor processor temperatures and increase fan speeds when temperatures are above the normal range. Consider getting a fan controller to simplify fan speed control.

Dirt, dust, and debris, like pet hair, can build up on your PC fans and reduce performance. Regular fan maintenance ensures that they perform optimally. Periodically check your case fans and clean them when dirty.

See how to fix overheating laptop without taking it apart

Overclocking helps increase PC performance but comes at a cost. It increases temperatures rapidly and can cause overheating. If you overclock your hardware, take extra precautions to keep it cool. Otherwise, you risk damaging your equipment.

Drivers updates continuously optimize how your PC processes data. If you are trying out a new game, check for driver updates. Updating the drivers will help your PC explore the game’s full potential.

Below are the most important specifications to consider when buying PC fans.

The two main metrics that determine fan performance are:

Measured in cubic feet per minute (CFM), airflow is the amount of air that a fan can move. A high airflow fan moves large volumes of air for faster cooling. Use airflow-optimized fans as exhaust fans.

Fan size is measured in millimeters. It denotes the estimated length of the frame or diameter of fan blades. A fan’s size affects how much air a fan can push and its RPM rating. Larger fans can create more airflow but draw more power. Thick fans generate increased airflow compared to thinner models.

Get a fan with a fluid dynamic bearing system if you want a quiet gaming environment. This unique bearing design is ultra-quiet so that you can hear every detail of your gaming background.

How many fans you can fit in your PC largely depends on the case. Compact models may have limited slots, while towers can fit more than five. When installing new fans, make sure they face the direction you intended. Also, consider other fans in your system for optimal airflow.

Below are some frequently asked questions about gaming PC fans.

Can a gaming PC run on two fans only?

Two fans are enough for low-end gaming PCs. You will need one fan at the intake and one at the exhaust. For high-end PCs, you will need at least three fans.

Are more fans better for a gaming PC?

More fans do not ensure optimal cooling. On the other hand, correct fan placement will prevent the creation of negative pressure.